More fun commentary from guest blogger, Chris Museler. His past posts on TotalBoat Show have delved into the late night boat work boogie that keeps getting these Moth Racers back up and running and back on the race course.  We sent Museler and a case of Thixo Fast Cure and Low Viscosity, along with some TotalBoat 5:1 Epoxy and plenty of hats and tees down to Bermuda. Check out his final report below. Chris might not have won the Amlin Regatta, but Thixo came out a winner with a whole new following of believers who put it to the ultimate test of application, curing and getting right down to work on the water. Thanks, Chris!

CM: Sitting on the trampoline of an International Moth is rarely good. It probably means you slipped in a gybe and you’re about to get your ear sliced open by your shroud. Well, that happened to the winner of last week’s Amlin International Moth Regatta in the penultimate day when there was another 25-30-knot front. 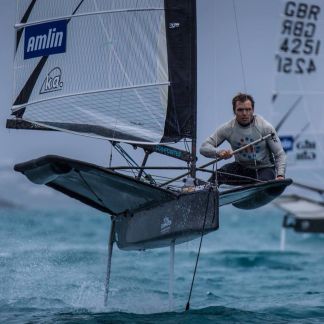 Rob Greenhalgh looked like he was in a round with Mike Tyson and on the light wind finale on Friday, the Volvo Ocean Race veteran, scabbed-over ear and all, was sitting mid tramp, coaxing his Exocet Moth across the line to clinch this inaugural Bermuda Moth regatta. With about a dozen Olympic medals represented among the fleet, America’s Cup winners, world champions, winner of this fall’s Transat Jacques Vabre and the best “corinthian sailors” on the planet all doing their own boat work and tuning, this regatta has started something amazing. There is The Vendee, The Volvo and now there is “The Amlin.” 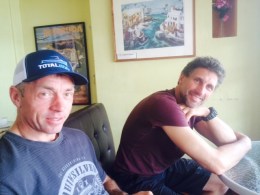 Greenhalgh sported a TotalBoat hat as he sat in a cafe last Friday after racing with two-time Olympic medalist Simon Hiscocks. But, as a finely tuned competitor usually affords, he had no use for the glues or paints that brand represents. “The boat did all the work for me,” he said to a reporter after hitting the docks at the Royal Bermuda Yacht Club. On top of this satisfaction, he was also rewarded with a $5,000 check.

The story of the event, though, was the massive breeze every two days, and the Herculean efforts of the sailors who used about a dozen tubes of TotalBoat’s Thixo and other TB epoxies and supplies to get their broken boats back on the track.

Thursday’s racing left an evening of repairs stuck in garbage bags with hairdryers attached for rapid curing. “In the third race there were piles of capsized boats between the leeward gates,” said Dan Ward, whose major transom repair had held through two days of racing. ” There was no room to go so sailors would crash at 30 knots and couldn’t get through until someone righted their boat and went around.

Ward said there was an unspoken agreement sorted out which all agreed on shore was called a , “one in, one out” leeward rounding scenario. “You’d come barreling into there and have nowhere to go so you’d just crash.” 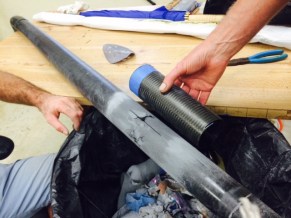 One of the most well thought out repairs that evening was commenced by Benoit Marie of France. This wide-eyed Frenchman won the outrageously aggressive and punishing Mini-Transat in 2013. There has yet to be a winner of the Vendee Globe who hasn’t trained for the same.

Marie, with help of the aforementioned Simon Owen-Smith, sanded and cut through his cracked wing bar. Luckily another broken wing bar had the same section in tact. The piece was dry-fitted then Thixo Low Viscosity epoxy was used as a glue. Though much thinner than Marie had expected, the fit of the sleeve was tight, banged on using the side of a file and a mallet, so little gap-filling was necessary. It was also way quicker than mixing regular epoxy in a pot. Into the bag with hairdryer it went and the repair held strong for the final day. 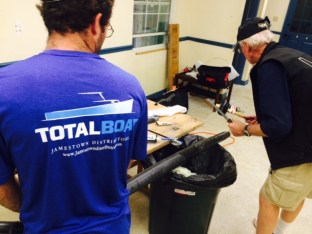 “Regional legend” British sailor and winner of the Corinthian trophy in 11th place was Tom Offer. After the big breeze of Thursday, Offer clamped a carbon plate to his shroud prodder for a new setting to allow his rig to bend more. The extra Thixo left on the cardboard with a popsicle stick was used to fillet Marie’s wing bar repair. 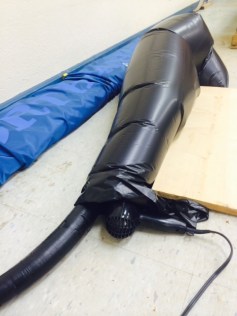 Interestingly, all the Bermudans and many of the international sailors had heard of or used www.JamestownDistributors.com. It makes sense in the global market of boat building and repair and the presence of JD and TotalBoat was a perfect fit with these world travelers who do all their own boat work.

The Americans ended the event with two top ten finishers with Anthony Kotoun and Victor Diaz de Leon. It was a tough event with the well-honed Brits staying consistent in both the light and heavy breeze. Nat Shaver, who had been modifying his Mach2 up until day one of the Amlin started planning his projects on the flight home last weekend. 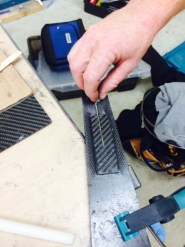 Shaver will design a high-lift main foil for the light winds and also a bowsprit, like the ones that served the British so well in the heavy going, keeping the wand far from the foil elements and stabilizing the ride.

With the US Fleet now in a container enroute to Miami, it looks like the lessons from the Amlin will manifest themselves in more creative boat development and a hungrier, more concise on-the-water regime. The next Amlin is now a year away and sponsors are reportedly committing to an annual event after this year’s rousing success. And there is a Moth world championship in Hayama, Japan between now and then. Who knows what will be developed between now and then, but in this group, ears and egos will heal and boats will always be put back on the track. 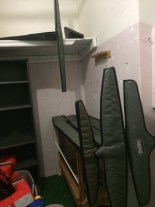 SOS Said it best at the awards about this class and the camaraderie and expertise present among the group. Referring to Dan Ward’s transom repair, he said: “To have your boat fall apart on day one and be out of the regatta for the rest of the week seems, to me, a bit of a shame. Given that these little machines are pretty high tech pieces of kit and someone can put a bandaid on them and get them back on the water, I enjoy doing it. And being surrounded by so much enthusiasm and people who are young at heart, that’s what it’s all about. Well done to all of you.”

And long live The Amlin!