We came across this post on the blog of the SV Ramble On, a Tayana 37. This young couple has big dreams about what they hope to do with their boat and their life savings – and they are documenting their every step on their great blog here. They have great detailed TO-DO lists broken down by category, advice and awe about budgeting a big overhaul and what it really takes to do it all yourself. They are great customers and we thank them for grabbing some of the TotalBoat Stripper and TotalFair fairing compound, and reviewing it here. They liked it so much, of course we had to share with you. Here is what they wrote – or head over to RambleOn’s blog and read it for yourself. (or click above/ read below)

From RambleOn: This weekend I finally started working on stripping the coachroof paint.  Back at the beginning of Spring, I scraped off the top layer of paint.  It seriously took me only a couple of hours because the paint was such shit.  It was so bad I could no longer hose off the boat without hosing off the dock and any neighboring boats because the paint was flaking so badly it looked like it had snowed.  This boat has about four or five layers of paint on it.  The top layer was dingy white color with a gray primer.  Below those are two or three stronger layers of tan, lighter tan and darker tan.

A year or more ago Rich, using a heat gun and scraper, started scraping off all layers of paint and non-skid at the back of the coachroof where the mainsail and staysail winches are located.  I continued this effort with little effect.  I cleared about 12 square inches in an hour.  The original paint and non-skid are really tough.  Those Taiwanese probably used some super industrial and toxic paint that was banned in the U.S. before it was even invented.  Anyway, I told Rich if he wanted the coachroof scraped down to bare gelcoat, he was more than welcome to have at it.  Actually what I did was convince him that we could paint over the old paint and non-skid and it would look just fine. 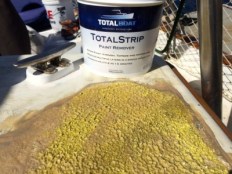 So Rich did a solvent test on the three remaining layers of paint and the top layer appears to be a one-part paint.  We’re planning to use a two-part paint so we have to remove the one-part paint before we can do that.  I’ve been procrastinating this project because I’m tired of scraping (see previous scraping endeavors here, here, and here).  Then a couple of weeks ago Rich sent me a link to Jamestown Distributors for their TotalBoat TotalStrip paint stripper.  I originally didn’t want to use a chemical stripper because my experience with them is that strippers are smelly and messy; plus I didn’t want chemicals running into to the slough (obviously.)  There were no reviews of it and I couldn’t find anything about it on a web search.  But because I’m so done with scraping I said buy it and I’ll try it. 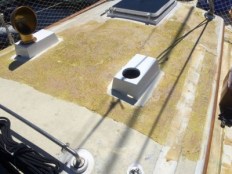 TotalStrip is supposedly non-toxic (though the ingredients sound pretty nasty), it’s thick like a gel and will stick to vertical surfaces, works on paint, varnish, and other coatings, and can be used on fiberglass, gelcoat, wood, metal, stone, etc.  And it doesn’t need to be neutralized; it cleans up with water.  I decided to do a test patch on the forward port side of the coachroof.  I slathered on a thick coat with a putty knife and let it sit.  It really is thick and did’t run at all and it has almost no odor.  The directions say the longer it sits the more layers of paint that will be removed.  After an hour the paint had bubbled and the gel looked to be drying out (it was a warm day).  I scraped off the old paint and it came up like butter.  I tried using a wire brush to scrub the paint that was left and it did lift some of it up, but the brush was gummed up pretty quickly.

I tried using a wire brush to scrub the paint that was left and it did lift some of it up, but the brush was gummed up pretty quickly. I continued with a thinner layer of the stripper gel 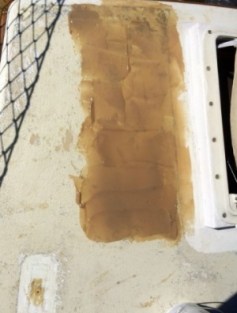 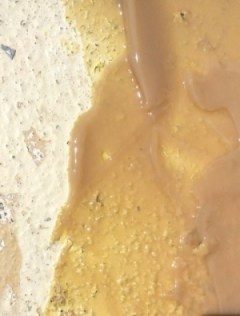 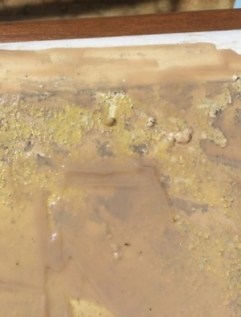 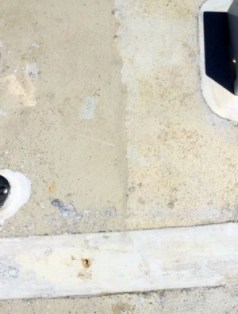 on the area forward of the staysail track and I put another layer on the port side test patch as well.  After another hour, the test patch looked even better.  The other, larger area looked good, but I’ll need to do another coat.  I found that two thinner layers with scraping in between works better than one thicker layer. 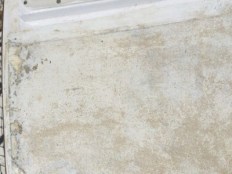 Overall, I’m really happy with the results.  I think this stripper is going to save me hours of tedious scraping.  I like the gel consistency of it and that it has no smell.  I really hope it’s non-toxic because Suki found her way onto the area I was working on and I had to wash her little feet in the sink, twice!  It’s a little pricey at $63.99/gallon (plus $4.99 hazmat handling fee).  I used an entire gallon on just the area forward of the staysail stay.  I ordered another two gallons and I’m pretty sure that will cover the rest of the coachroof at least once, but hopefully twice.  My only regret is that I didn’t try this stuff on the teak.