Greetings, fans of boatbuilding and time lapse. In the age of modern video and boatbuilding, there is no finer combo than speeding up a big, complex job to be just a few minutes. These boatbuilders at Lyman Morse in Maine make it look easy in real time, but once it’s sped up – it just takes a few minutes to lay down the layers of planking on this cold-molded hull. END_OF_DOCUMENT_TOKEN_TO_BE_REPLACED

The JD/ TotalBoat team had a great experience at this past weekend’s Wooden Boat Show in Mystic, CT. Many of our customers would say the same, as a handful won some of the most prestigious awards handed out at the annual show.  Congrats to LMI and East Passage Boatwrights for their work on Santana which was entered in the Concours d’Elegance and won Best in Show in the Sailboat Professionally Maintained category. Arey’s Pond Boat Yard Won the Concours d’Elegance for Best in Show in the Sailboat Professionally Maintained category (maintained by Arey’s Pond Boat Yard of course). And MP & G won with their amazing Buzzard’s Bay restoration of Mink, complete with period (1914!) pieces like a PFD, horns and anchor, sails and even hemp rope! END_OF_DOCUMENT_TOKEN_TO_BE_REPLACED

Here is some more fodder for those of you who are dreaming of a live aboard life. The boat doesn’t have to be fancy or large, just solid and seaworthy. This family of four has toured the world aboard their 34′ wooden sailboat, sparing themselves from monthly bills, a mortgage and best of all – real 9-5 jobs.

Take a little glimpse into the enchanted and simple yet gratifying life of this family. Enjoying the simple life seems to work for them and their family. Boat repairs and maintenance, the most important safety concern, are not tedious because of Dad’s boatbuilding skills. And home-schooling and child rearing is made enjoyable with lots of help from Mother Nature and gifts of culture and humanity from around the world.  Would you raise a young family aboard a 34′ boat?

I love a lazy Sunday morning with a cup of coffee and the latest TotalBoatShow.com post… don’t you? Well, after reading up on the day’s latest blog post I try to tune into the serene news program I have come to love: CBS Sunday Morning. There is rarely a stressful, controversial news story offered by the veteran news team led by Charles Osgood. Instead, they focus on the pleasures of American life. And a few weeks ago they hit the nail on the head: Conor Knighton dug into the passion we have for beautiful wooden boats. Powerboats, to be exact. He credits On Golden Pond and Chris Craft for keeping us enamored with these fine vessels and all the work, varnish and love that goes into owning one.

So, even though it’s only Wednesday – grab your cuppa joe and enlighten yourself in 4 minutes of sublime Americana. The wooden kind. It’s a rare treat to have a major news program focus on our watery world that we already appreciate. But to share in the enthusiasm from the popular media somehow gives merit to our brush strokes and planking tribulations. And we get to delight in knowing we can enjoy the real thing for more than just 4 minutes.

Captain Nat Herreshoff probably never imagined someone (like his grandson, Halsey Herreshoff) would be taking the measurements off of his molds to make 3D computer images of the boats lines. For certain he envisioned them being used to create boats to the millimeter of his scaled models, but the computer 3D imaging – never! Don’t misunderstand though, Capt. Nat was at the forefront of yachting’s technological movement at his time, developing the first light steam engine and creating the first fast steam torpedo boats for the US Navy.

Oh the epoxy and fiberglass this guy must go through for his daggerboard! What a wonderful little movie about how sailing can transport you to places you just can’t reach by shore. And who said it has to be far away or even far from shore? This guy couldn’t get any closer to “land!”

Does anyone get to enjoy sailing like this near your own home port? Reminds me of the rocks off Ocean Drive in Newport. I am adding this to my Boating Bucket List! Off Piste Sailing! Love it.

Maine beckons those of us who love the rugged coast of New England and boating! It’s rich boatbuilding history is steeped in traditional wooden boatbuilding methods and there are many standout schools in the great northern state that attract the very best wooden boat enthusiasts. The Wooden BoatSchool is at the forefront of the pack of excellent schools in Maine, and this video lets their alumni explain what brings them back to the school years after their graduation.

From YouTube Page: The WoodenBoat School in Brooklin, Maine, offers classes in boatbuilding and seamanship from June to September: Each spring, a few lucky alumni of the School from all over the United States return to the school to help commission the campus and boats for the season. For two weeks, they paint, hammer, chisel, and saw. In the process, they bring the place to life while honing their skills and forging deep friendships.

Anyone who completes a class at the WoodenBoat School is considered an alumnus and is eligible to participate in Alumni Week. So many people want to work for free we have to hold a lottery. The ones who are selected consider themselves lucky.

Maybe you can join them. Become a student at www.thewoodenboatschool.com

Rocking the Boat situated in the Bronx, NY, has brilliantly reached out to kids who might need distraction in the form of function, art and certainly boating! Read about “Rocking the Boat” and watch the video about their admirable mission to get kids into and conquering projects they never thought possible.

Jamestown Distributors has been donating to this amazing program for years and they, in turn, have been excellent customers. It is so satisfying to be able to contribute to organizations like Rocking the Boat and see the love for hand crafting, wood working and boating be passed along to kids who might never have had the chance to hold a tiller or a plane. Constructing and rowing your own boat is a project that reaches so many important levels of being a responsible human. There are lessons in crafting, woodworking and in life that manifest themselves throughout a build project and getting kids excited about it all is even more of a victory than the finished product.

The idea first infected him as a Vassar College student in 1996, when he spent a “semester abroad” volunteering at a middle school in East Harlem—one of the U.S.’s poorest urban neighborhoods at the time. Despite having no prior boat building experience, he worked with students to make “Dolphin,” an 8 foot wooden dinghy which was launched in the school swimming pool.

After graduating, Green returned to New York City with a certificate to teach, but gave up that plan to launch Rocking the Boat—a boat building and environmental education program which now serves 2,000 youth and community members annually in the South Bronx. The aim is not to turn kids into professional boat builders, but to help them recognize abilities they possess that will help them thrive in school and beyond.

Rocking the Boat empowers young people from the South Bronx to develop the self-confidence to set ambitious goals and gain the skills necessary to achieve them. Students work together to build wooden boats, learn to row and sail, and restore local urban waterways, revitalizing their community while creating better lives for themselves.

HOW COOL IS THAT? Support Rocking the Boat by donating here.

This video is from a few years ago, but it showcases the wooden passion exhibited at the annual Wooden Boat Show at Mystic Seaport. This weekend, (June 26-28 from 9-5p daily) the 24th iteration of this popular wooden boat event will take place and our good friend, TotalBoat Ambassador, Richard Honan (featured in recent TotalBoat Show blogs) will be on hand to show his latest craft, his Adirondack Guide Boat. He will be defending his 2014 title for winner of the “I Built it Myself,” Contest. Stop by and wish Richard well and tell him TotalBoat Show sent you!

Other fun events include a Concours d’Elegance, including Judges’ Choice, Innovation, and People’s Choice awards; and skua races, demonstrations, boatbuilding and woodworking supplier booths (Sorry, No JD booth this year) and much more.

It’s always a great time! Let us know if you make it there by sending us a pic of your favorite boat to images@jamestowndistributors.com

Personally, I think Dorade is one of the coolest older wooden racing sailboats afloat. The Sparkman & Stephens yawl is a beauty in every way, in every harbor, to every yacht designer. It’s certain.

She was once a record wrecker, winning many of the big ocean races, like the TransPac, the Fastnet, and Newport-Bermuda amongst others. She became known and feared as a serious blue water racer and her latest owner has vowed to snatch back the trophies again – with 2 of 3 down and one to go: The TransAtlantic Race.

On June 28th, Dorade and her 40 fellow competitors, will head out of Newport, bows pointed towards the Lizard, the most southerly point on mainland Great Britain, some 2,800 nautical miles from the Newport start.

Follow along at the Dorade blog – Excerpt below:  SO COOL! GO Dorade.

DORADE BLOG: On June 28, the legendary ocean racing yacht Dorade will attempt to repeat her first and most significant victory when she embarks on the 2015 Transatlantic Race from Newport, R.I. to Plymouth, U.K. The 52-foot yawl first made her mark in the sailing world in 1931, when her then-21-year-old designer Olin Stephens, along with his brother Rod, their father, and four other young amateur sailors, raced her to victory in the 2,800-mile race across the Atlantic.Dorade’s 2015 crew, led by owner Matt Brooks (San Francisco, Calif.), has its sights set on finishing the race in good order again this summer, 84 years after the first victory, and beating Dorade’s time of 17 days, one hour and 14 minutes. 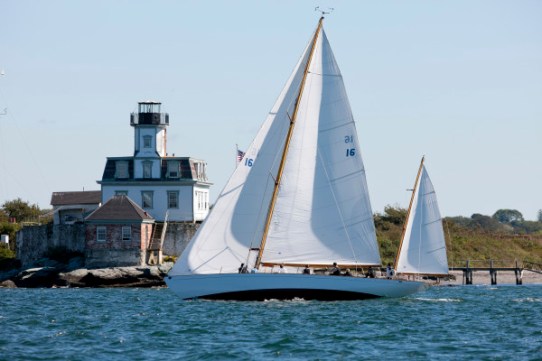 The Transatlantic Race is the third in a series of four major ocean races in the “Return to Blue Water Campaign.” Conceived shortly after Brooks and his wife Pam Rorke Levy bought Dorade in 2010, the campaign was initially called “Matt’s Crazy Idea,” but soon after the completion of a year-long refit Dorade began winning races, both offshore and in coastal regattas in the Mediterranean and the Caribbean and on the West Coast, proving that she could once again be competitive. The team silenced the campaign’s critics once and for all in 2013, when Dorade was the overall winner (on corrected time) in the 2013 Transpacific Yacht Race, 77 years after its first victory with the race. That was followed by an IRC class win in the 2014 Newport Bermuda Race. The campaign wraps up this August with the Rolex Fastnet Race, which Dorade won overall in 1931 and 1933.